The nights in Indian Creek were cold but especially so our first night. There was a frost warning and I spent the first hour of the night trying to convince myself to get out of my warm cocoon of a sleeping bag to go outside and pee. Camping in the cold always seems to bring on middle of the night pee breaks. I always spend about thirty to sixty minutes trying to fight it before I give up and finally bare the cold, which has never been as bad as I think it will be. I managed to eventually fall asleep that night but we woke up later than the rest of the crew. The downside of sleeping in the back of a truck is that there is no way to get out and pee in the middle of the night without waking up your partner. So Mike was just as tired as me. 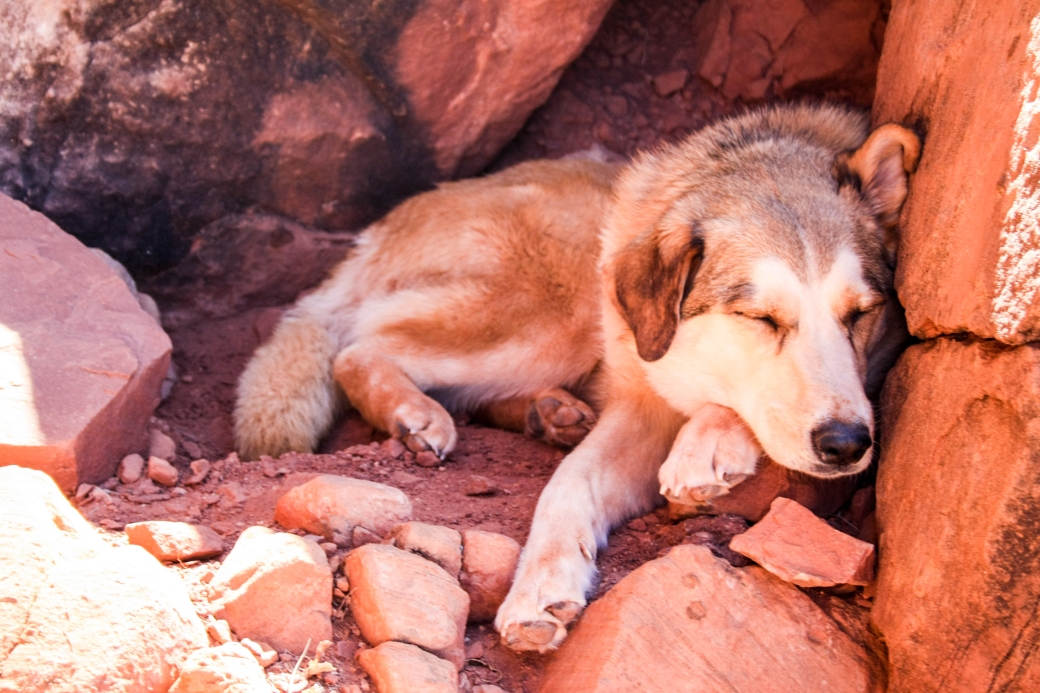 Buffy always found some shade while we climbed in Indian Creek.

The crew gathered around our table for morning breakfast and coffee. The objectives of the day were discussed by the leaders in our crew. Four of us had never climbed in Indian Creek and were inexperienced crack climbers at best, we had all come on the trip knowing we would be relying on others to lead up routes on this trip.  So the decision was made to head to the Optimizer wall and those who were ready started to pack up. Mike and I would be joining later since we wanted to set up our camp and sleep in our tent that night.

After snapping a photo of the wall directions, we headed to work setting up our camp as everyone else drove off. It didn’t take long to set up camp and pack up our things. We threw our bags and the dogs into the back of the truck and jumped in ready to head to the crag. The guide book had good directions for the wall, but being inexperienced in the area, our first attempt took us through some dirt roads of the only farm in the area. It only took a few minutes to realize we had not driven far enough down the road (damn kilometre to miles conversions). Once we found the right turn off, we drove past the main parking lot and headed onto the dirt road. We passed through a large water puddle almost a foot deep and quickly saw the area that the other cars had parked at. We knew we could go further with the truck so we continued down the road until we got to the base of the wall.

The Optimizer wall was my first close up look of the climbing in Indian Creek. As we hiked up and got closer, the sandstone pillars loomed up and over us. It was so vertical and intimidating. How was I ever going to get up that kind of thing? We passed by some other Canadians from the Alpine club climbing up some amazing splitters. Some of them were swearing as they worked their way up the routes. Finally, we found our group as Khrisna, my sister’s boyfriend was finishing up a route. Tyler, who I met for the first time on this trip, was hanging out with his homemade didgeridoo, playing it loud enough for it to echo off the surrounding walls. It was things like this which make me love climbing trips. Climbers are interesting, passionate and often quirky people who I love spending time with. It’s a tribe of sorts, and my first climbing trip to Squamish years ago had made me realize that I belong. 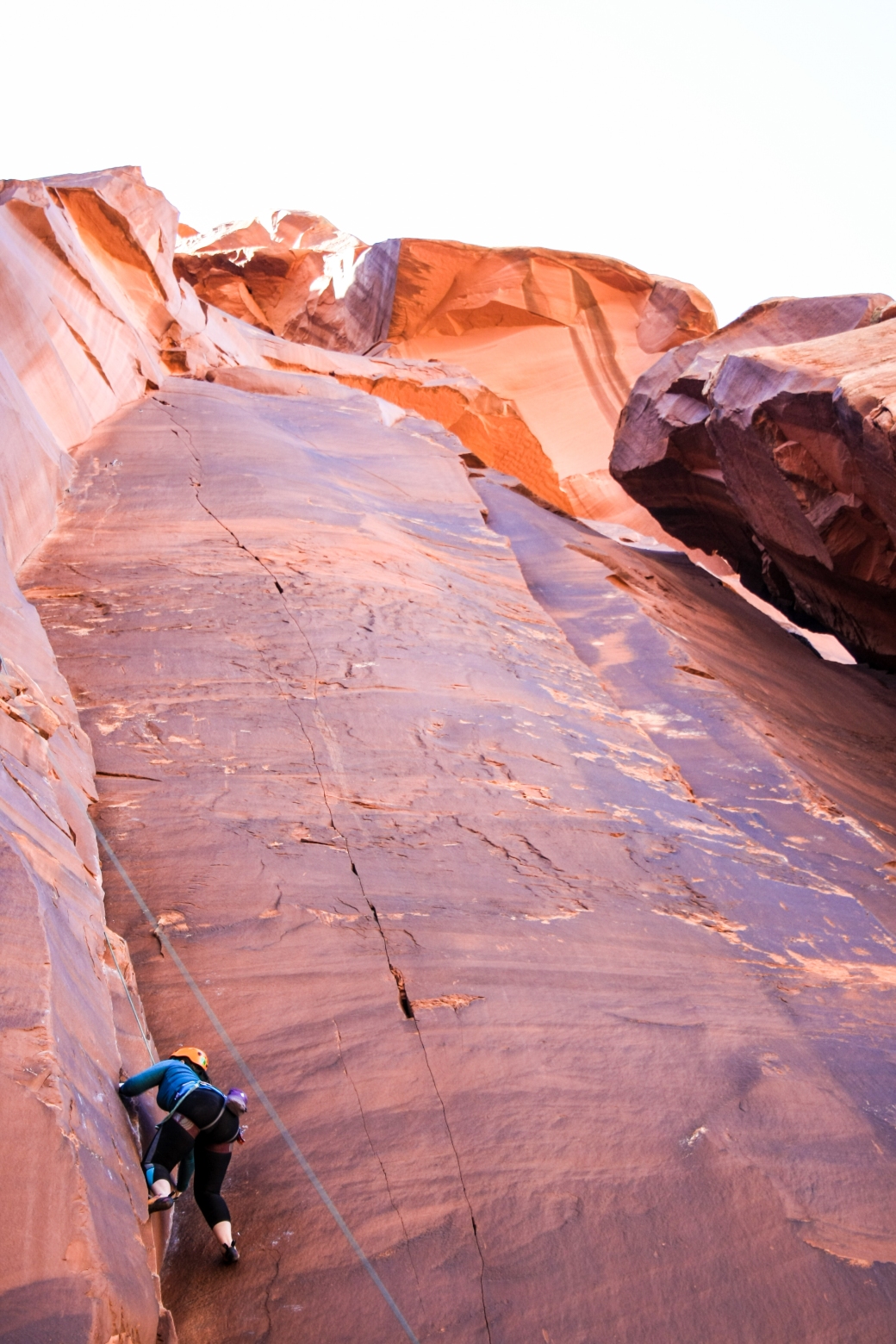 Me trying to figure out this crack climbing thing.

I set the dogs up in a corner with some shade and water and we started our ritual of getting ready. Harnesses were carefully slipped on and tightened up, personal anchors clipped on, chalk bag, and now, a new ritual, learning how to tape our hands for jamming. We asked several opinions from the seasoned climbers on what they preferred which started a long conversation about tape versus crack gloves and occasionally using both if your hands weren’t the right size. You can always count on climbers for one thing: their love of talking about climbing.

The newbie crew of four all took turns climbing up The Ladie Pillar. The route, a 5.10, seemed hard for my first crack climb, but as it turns out, climbing grades do not count for much in Indian Creek. It was all about the size of your hands. 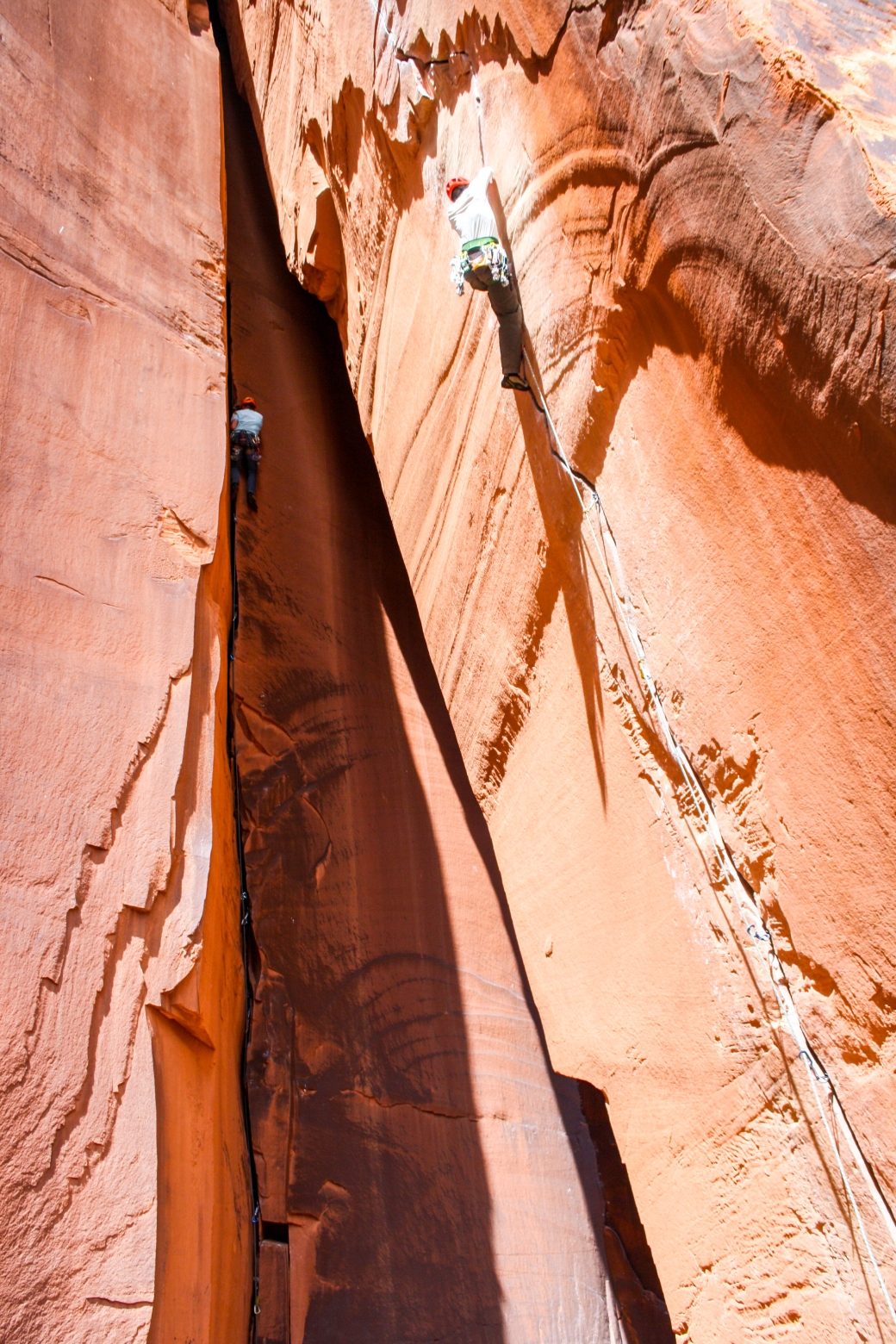 When it was my turn, I walked up to the wall and tied in at the bottom. The beginning of the climb was up a small textured section where I could fairly easily get up. The rock texture felt foreign compared to the western Canadian rock I was used, and I felt a sense of unease on the first few moves. As I cleared the first section of easy climbing, I got to the first true crack climbing section. I stood there for a few minutes, feeling the rock with my hands, trying to see if I could squeeze my hands in, desperately trying to squeeze my foot in. I knew it was all about jamming, but I didn’t have much technique. I squeezed my hands in up to my palms and I twisted, it felt solid. So I started up. The climb was a mixture of crack sections and crack sections with cheater moves for face climbers. I definitely took advantage but also took my time trying to improve my jams. I experimented with different ways of jamming my hands into the rock and had a terrifying moment where my finger locked in so strong I couldn’t move it. I had bent a knuckle on my finger and it locked so well that I couldn’t move it at first. I quickly managed to get it out, but I never tried that move again for the rest of the trip. I surprised myself by making it up the climb. It felt good to conquer my first Indian Creek route.

The next day I finally started to get some better technique.

As the day continued on, I belayed Mark, the strongest climber on our trip, on a hard route that looked impossible to get up. I was terrified of short roping him but also didn’t want to give too much rope since it looked incredibly easy to fall off the route. It was an incredible thing to watch him climbing. He is as passionate as they come about climbing and it was impressive to see how well he could manage the pump and get through the crux. He let out loud grunts as he worked his way up the overhanging thin crack. There were no crimps, no smears, just the crack and somehow he made it work.

We headed down from the wall as the sun was hanging low just above the horizon. A couple of our climbers were finishing up a route as most of use hiked down and we headed to the truck. We cracked cold beers from the cooler we had packed with snow the day before. It felt I incredibly satisfying after a day of learning how to climb all over again. Mike and I threw everyone’s heavy bags into the back of the truck to drive them back to the cars, and we headed back to the campsite with fading light in the sky. We all cooked with headlamps and lanterns that night and had to layer up because every time the sun went down, it seemed to drop fifteen degrees. But the food was satisfying and the day even more so.

Sofie enjoying some cuddles from Cody as she rests between climbs.

I would continue to jam my way up climbs the next day but one of my biggest adventures would come several days later when we headed back to the La Sals to attempt a line we had spotted on our way in. It would turn out to be a day of adventure, close calls and bushwacking, a true epic.