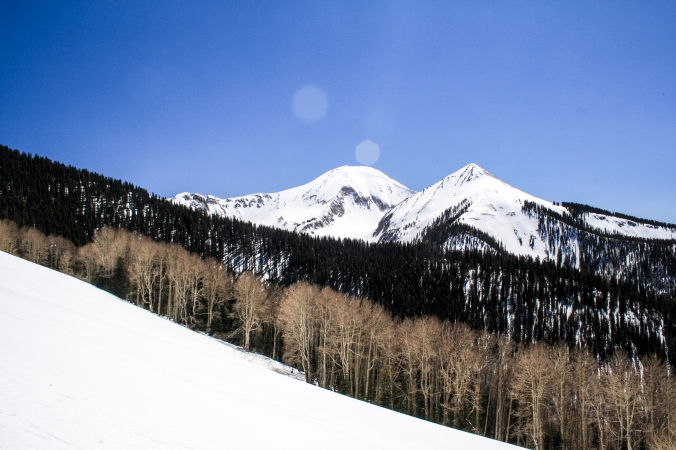 We figured it was going to take two days to drive from Calgary to Moab Utah. We had decided we would leave early on the 7th. That way we could make it through most of Montana and sleep somewhere near the Idaho boarder for the night. But, surprise, things don’t always go as planned. It ended up being one of those hectic mornings where things kept going missing and time moved too fast. By the time we left it was 1pm, but we finally had the truck packed with all of our gear, the dogs, and we hit the road.

Mike and I had been invited by my sister, along with a pack of our friends, to join a climbing trip down in Indian Creek in April. Our only hesitation was that April was prime spring ski touring time in the Rockies and we would be missing out on sweet corn turns. But I knew that we couldn’t go to Indian Creek on our own, I had been following up trad routes for a couple of years but I was rockies face climber and there was no way I could lead up perfect sandstone splitters. So we decided to join, almost reluctantly, until a couple of days before our trip start date, when I discovered the library had a copy of a Utah ski touring guide and there were mountains, with spring touring, right near Moab: The La Sals. Suddenly the stoke was high.

I had only driven through Montana once before. It was the summer of 2014 when I had packed up my car with all of my belongings, my two dogs, and driven from Ottawa back to the west. The short section through Montana was flat and the gas stations inhabited by cowboys and farmers. This Montana was different. The vicious side wind made for adventurous driving through the prairies. Every time we passed a tractor trailer we would get sucked into the vortex and have to hold the steering wheel as steady as possible. Then, once we hit the mountains, it all changed. The landscape went from straight and flat to hilly, with rocky outcrops sitting along the highway at a higher elevation than many hikes in the Canadian Rockies. At times, it felt like driving through the top of the treeline in the mountains.

That night we made it all the way to Butte Montana and decided it was easiest to sleep at the parking lot at Walmart. We would soon learn that there are much better places to crash for the night in the back of the truck. After brushing my teeth and going for a pee next to a tree that was probably in sight of the Walmart security cameras, we crawled into the back. A street sweeper lapped the parking lot passing the truck so many times that I lost count. Once he was finally done, a generator from a nearby RV turned on and I realized then that fighting it was futile and I should just make sure to bring ear plugs next time.

The next day, we got another late start but met some Newfoundlanders (the ones responsible for the generator). They were headed up to Calgary to visit family so we suggested a couple of hikes and hit the road at ten. We didn’t know it then, but we wouldn’t make it to Moab that night.

The view from our rest stop just outside of Moab, Utah.

The road from Butte through the rest of Montana was beautiful. It was more high country with rolling hills and rocky outcrops. We spotted lines of snow on the hills as we drove and joked about stopping to pull our gear out and go for a quick lap. But we wanted to get to Moab and we still had Idaho and much of Utah to get through. Idaho, it turned out, was the last place to easily get higher alcohol content liquor. So our main stop in the state involved finding a gas station with cheap american beer. As we drove up higher on the highway towards Utah, a wet snowy downpour started. We stopped at a rest stop to enjoy the arid landscape of bushes and small tress covered in snow. It made for a beautiful contrasted landscape.

As we drove into Utah, the traffic picked up. We were nearing Salt Lake City and we knew this meant more traffic. The snarl of traffic was offset by the mountains rising just to the east of Salt Lake City. Although it was pouring, we could still see that they were steep and beautiful. The kind of mountains that create the athletes the area is known for. I could see why it was an outdoor mecca. I felt a sense of envy for this city. Calgary’s mountains are still an hour away, here, they were in the backyard of the metropolis.

We eventually crossed my sister and her boyfriend who had left after us the day before. It was late when we met them at a rest stop next to some train tracks. They told us of a rest stop just before Moab which would make for a nice place to crash. We left them as they settled into the back of her hatchback for a tight sleep next to the climbing gear.  We continued on for a couple of hours and though it was dark you could tell the landscape was changing. It wasn’t mountains anymore but flatness and odd shadows barely lit by the moon.  We eventually found the rest stop they had told us about. It felt like sleeping at a five star hotel compared to that Walmart parking lot. We had picnic tables, a view, heated washrooms with running water and the low humming of tractor trailers to help us fall asleep. This, we would learn, was not the exception but the rule for rest stops in the states we visited.

When we woke on the 9th, we got up early and hit the road after eating some breakfast with a view. The landscape the night before that had felt so alien in the dark, now felt familiar but only because of movies and television. It was still alien to my eyes and unlike anything I had seen before. For the next two weeks, Utah would continue to take my breath away.

Mike skiing down the La Sals with the dogs in hot pursuit.

After getting to Moab and meeting up with the crew. We parted ways with plans to meet up in Indian Creek later that day. Mike and I headed for the La Sals. It was full blown hot desert at valley bottom and full spring touring in the La Sals. I was amazed that the parking lot sat at almost 3,000 meters elevation. That was higher than most of the peaks I have summited in the Rockies.

The dogs were thrilled for a stop which allowed them to run around. So we strapped on our gear and headed up to an alpine meadow for some easy fun corn snow laps. As I snowboarded down the slope, carving sweet corn turns, I couldn’t help but think how rad it was to be snowboarding and looking out to the desert landscape. All I could think was “this place is special”.

After a couple of laps on the mountain, we hit the road for Indian Creek. As we entered the park, I was blown away by the amazing landscape. Sandstone walls lined either sides of the valley with pillars and cracks all over. There were boulders the size of large vans at the bottom of the cliffs, emphasizing to me how brittle this rock was. It reminded me just how crazy rock climbing is sometimes, that we willingly haul ourselves up walls that are only a picture in time of the rock and that one day, what we touch will all crumble apart.

The moon rising behind our campsite in Indian Creek.

We joined the crew of Canadians at the Super Bowl campsite. Our group of seven was only a third of the Calgary delegation that had come down. Fellow Alpine Club Members and dirtbag climbers were everywhere. Our campsite had a perfect view of the North Six Shooter Tower. That evening the moon rose above the sandstone walls and we fell asleep early in the back of the truck, deciding that tomorrow would be a better day to set up the tent. I had heard about how hard it was to climb in Indian Creek. I knew it was a testing ground for crack climbing and my lack of crack climbing experience made me nervous. But I was excited to try to learn and relieved that I had the opportunity to come down with so many experienced Trad and Crack climbers to set up top ropes!

The to-do list. Productivity tool. Brain de-clutterer. Grocery tracker. Chore tasker. It’s the list we all have. Often on our phones, maybe on some paper, post-its, or even kitchen white-boards (maybe even all four). It’s the list we have 20 versions of: one for groceries, one for work tasks, one for home chores, one for […]

Buffy passed on January 20th, 2022, leaving behind the broken hearts of those who loved her and a quiet celebration from the many cats she had tormented throughout her life. As a young puppy, Buffy loved to explore, play and learn. She also loved to challenge herself physically by climbing the walls of her pen […]

Time for something new.

I took a long pause from this site. In fact, just a couple months ago I wasn’t sure I would even renew the website or the domain. Since I started my own dog training and behaviour consulting business, most of my effort went into that platform. I focused on writing educational content for blog posts […]

How a shock collar WILL change your relationship with your dog, but not the way you may think

I wrote an article last November about shock collars and how they are not appropriate for adventure dogs, or really any dog. But here I am again, writing another article about this topic that is somehow controversial (I say somehow, since the science on its harms is clear). So why am I writing this again?  […]

This past October, my younger dog Buffy turned 7 and according to the standards, entered her senior years (don’t you dare call her an old lady though). She doesn’t act 7 and my recently…10 year old Cody, doesn’t either. In fact, two summers ago someone thought he was a puppy because he scrambled up a […]