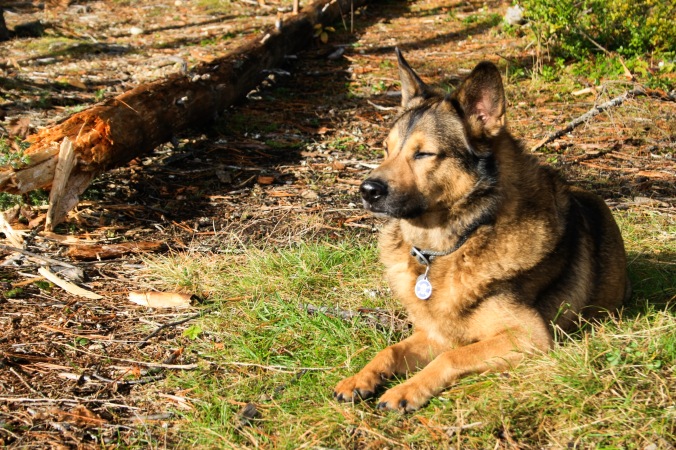 Cody is an Ohio dog, born sometime early 2010, my guess is he spent the first six months of his life tied up in a yard. One thing is clear, he was not properly socialized. I met Cody in September of 2010 in Ottawa, I went to visit him at his foster family and from the moment I walked in he was all over me. The foster family was in awe and insisted he never reacted like that, I didn’t believe them, he seemed like a perfectly normal dog. So I adopted him and when I brought him home he was too scared to walk on the street. I realized why they were astounded the first time he was introduced to some of my friends, he wasn’t quite as trusting as he had been with me. Maybe it’s one of those “he picked me” moments, but either way, it sent us on a long path of learning, training and patience. I enrolled in a dog trainer program just to be able to help fix him. I’m happy to say today he is most at home in the mountains but even though he doesn’t love a busy street, he can walk across them and comes around to new people pretty quickly. 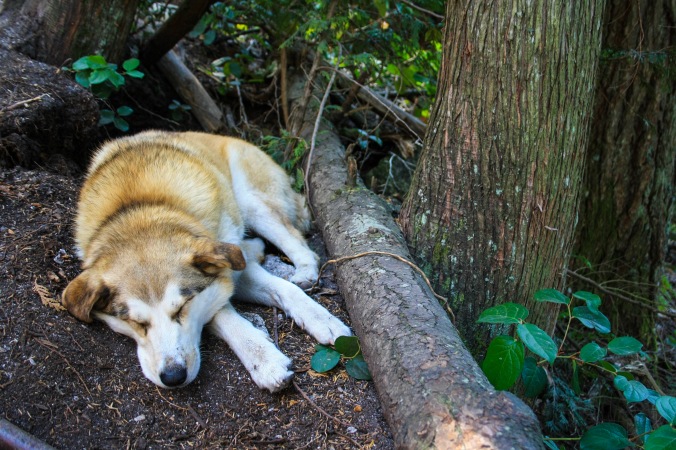 I got Buffy at 7 weeks old. She was the pup of an unplanned litter and I was newly armed with my dog trainer training and had changed jobs which meant I could no longer bring Cody to work, so I bought him a puppy (but also got her for myself, obviously). I will fully admit she made me cry. She was a menace as a puppy and hard to contain in her pen throughout the day (I should have called her Monkey). I came home more than once to a trashed home until I figured out a high security prison style installation onto her pen.

Buffy had some husky, golden retriever and maybe something else. An awesome combination that made her an excellent adventure dog. Even though she was actually very well trained, she loved to talk back with her husky sass and she was a total goof who always made me laugh.

Buffy tragically passed on January 20, 2022. I will forever honour her in my writing, hoping to bring some of her joy and passion to the world, while passing on the many lives that this k9 soulmate passed on to me in her 9 years earthbound.

The to-do list. Productivity tool. Brain de-clutterer. Grocery tracker. Chore tasker. It’s the list we all have. Often on our phones, maybe on some paper, post-its, or even kitchen white-boards (maybe even all four). It’s the list we have 20 versions of: one for groceries, one for work tasks, one for home chores, one for […]

Buffy passed on January 20th, 2022, leaving behind the broken hearts of those who loved her and a quiet celebration from the many cats she had tormented throughout her life. As a young puppy, Buffy loved to explore, play and learn. She also loved to challenge herself physically by climbing the walls of her pen […]

Time for something new.

I took a long pause from this site. In fact, just a couple months ago I wasn’t sure I would even renew the website or the domain. Since I started my own dog training and behaviour consulting business, most of my effort went into that platform. I focused on writing educational content for blog posts […]

How a shock collar WILL change your relationship with your dog, but not the way you may think

I wrote an article last November about shock collars and how they are not appropriate for adventure dogs, or really any dog. But here I am again, writing another article about this topic that is somehow controversial (I say somehow, since the science on its harms is clear). So why am I writing this again?  […]

This past October, my younger dog Buffy turned 7 and according to the standards, entered her senior years (don’t you dare call her an old lady though). She doesn’t act 7 and my recently…10 year old Cody, doesn’t either. In fact, two summers ago someone thought he was a puppy because he scrambled up a […]