After my fall across sharp talus rocks on Mount Haystack, my stomach swelled up enough to be visible through my shirt and my leg hurt when I put weight on it, so I took it easy for a couple of days, only getting on a climb or two every day. I felt happy to have come out of that fall with only these injuries and nothing worse.

When my sister had invited us onto the trip a couple months earlier, she had brought over the Utah climbing books so that we could go through them and pick some objectives. I had stumbled upon the The Looking Glass and I was immediately certain it was something I wanted to do. The route climbed up 4 pitches of easy slab climbing and then descended onto a ledge where you could lower into an over 50 meter open rappel. It looked like a blast. So on the last day in the desert for three of our crew, we decided it would be a fun objective and headed out early in the morning.

Looking through the hole on the back side of the feature.

As we hiked up to the start of the route we could see the rattle snake tracks in the sand. It was clear that there were several snake dens around the feature but we hadn’t seen any yet and we just chose to be cautious. At the base of the climb, a clean log leaned against the start of the route. None of us had ever completed the route before and so those who were heading up first struggled up the log assuming it was the only way up. Mark and I, who were going to go after the crew came down, since I had the dogs to wait with, watched and laughed as everyone pulled their way up this grip free log. It was determined that this start probably took the route to 5.11 instead of the 5.4 it was supposed to be. We watched them disappear and headed to the open feature to watch them rappel out. 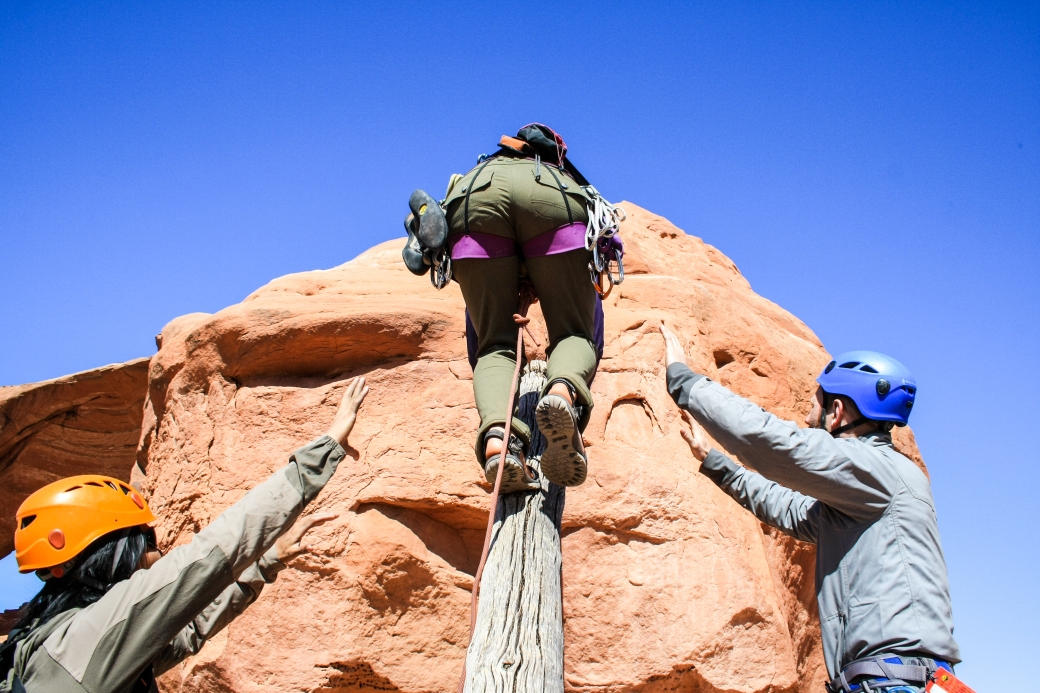 My sister making her way up the log start of the route.

It was larger than I thought it would be. I’ve always been a bad judge of distance and it looked intimidating as I watched them slowly lower out into the open and hanging with nothing even close to nearby. I snapped photos as the crew came down and then my sister took the dogs, and Mike, Sofie, Mark and I headed up. I started up first, not on the log though. Mark and I had chatted with other climbers and found out that the real start was off the left. So I started up the easy jugs and got on top of the slab. Then Mike said “hold on Lynn, you just put your foot right next to a baby rattle snake”. My stomach dropped and I’m sure the blood drained out of my face. Juvenile rattle snakes are more deadly than adults because they have less control over how much venom to use. I had just put my foot next to a deadly snake without knowing it. It only took a minute to decide that everyone should head up quickly and so we all got on the slab.

The climb was easy and the ropes almost felt unnecessary but it was quite windy and at times I felt so much safer being roped in. At the top, the view was incredible. We could see for miles in all directions and walk around the large slabby surface easily. We unroped and took some photos before getting ready to drop onto the ledge. The ledge required you to be lowered onto it since the hole, for the over 50 meter drop, was definitely large enough to accidentally fall through. So one by one we lowered onto the ledge and my stomach started to twist. Looking down into the open, it looked so far. Once Mike got down onto the ledge we pulled the rope and I tied the two ropes together. This was my first time tying my ropes together. I had practiced numerous times before but I hadn’t actually tied them together and lowered off of them, much less into an open rappel. I put the one rope through the three tie in points (1 piton and 2 bolts with rings) and tied them. I tugged so many times to make sure they were safe and then Sofie put on her rappel device and I watched her disappear through the hole. Mark followed and I looked at Mike as I started to feel sick. All I could picture was weighting it fully and having the anchor break and falling to my death. I had watched almost 10 people rappel down before me yet my brain thought this was still a big possibility.

Sofie coming through the hole at the start of the route.

When it was my turn I was shaking as I tied in my rappel device and secured my prussik. Mike double checked me and I hesitated before taking off my personal anchor. I was so nervous. “You’ll be fine once you’re out in the open, trust me.” Mike said and I looked down and then immediately back up at him. “I just need to look at you, and not down. I love you.” I said and he chuckled at my drama. I unclipped my personal anchor and then started to shuffle down through the hole. My legs stayed on the wall and the further I went, the better I felt. Then my feet left the sandstone and I was out in the open high up and felt like I was floating. I let out a big woo hoo as I lowered slowly, savouring every moment. My screams echoed off the stone and I started to sing Hero by Enrique Iglesias, over the years it had become a song that Mike would sing to me when we were involved in some kind of backcountry epic. I belted it out as I lowered and had a blast.

The cover shot and one of my favourite shots from the trip. Mike rappelling down the straight line.

After Mike came down we left the ropes up since no one was waiting to come down, and we walked up the slab and clipped in to swing through the feature. It was everything I had imagined it would be and more. I had been scared, but pushing past the fear had felt so good. That’s what climbing is all about for me, it’s a dance between fear and excitement and when excitement leads, it’s glorious. But ever since I had taken a big lead fall, fear was often leading. I was finally starting to feel like excitement had a chance to make a full comeback.